The Relaxation has been made since there are still a large number of electronic returns relating to A.Y. 20011-12 which had been filed on or before due date but for which the ITR-V forms have not yet been received at the Centralized Processing Center (CPC), Bengaluru. these Taxpayers are being given an opportunity to send ITR-V forms to the CPC, Bengaluru by the date mentioned in above para. 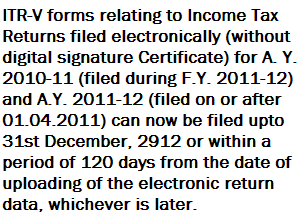