You are here: Home / Others / NRE, NRO & Other Bank Accounts for NRI

Difference between NRE and NRO Accounts

There are three different types of Accounts (earlier there were 4 but one has been stopped by RBI  w.e.f. 1st April, 2012) for Non-Resident Indians (NRIs), but most popular among them are NRE and NRO.

NRI faces a dilemma at the beginning of their NRI status that what kind of bank account should they maintain back home in India? Should it be an NRO account, or should it be an NRE account? or Some other like FCNR? What can each be used for? Let’s understand these things in detail.

Who is an NRI?

An Indian Citizen who stays abroad for employment/carrying on a business or vocation outside India, or stays abroad under circumstances indicating an intention for an uncertain duration of stay abroad is a non-resident. Non-resident foreign citizens of Indian Origin are treated on par with non- resident Indian citizen (NRIs).

Person can have Indian origin, if,

An NRI can make the following investments in India.

A Non-Resident External (NRE) account is a bank account that’s opened by depositing home currency (rupees) at the time of opening a bank account. This currency can be tendered in the form of traveler’s checks or notes.

All balances in the account are held in Indian rupees and are thus exposed to exchange fluctuation risk.

A Non-Resident Ordinary (NRO) account is the normal bank account, in rupees, opened by an Indian going abroad with the intention of becoming an NRI. An NRI can also open this account by sending remittances from his home country or by transferring funds from his other NRO account. It offers the same facilities as an NRE account, except that any repatriation done through this account should be reported to RBI by filling up prescribed forms.

How do NRE and NRO accounts differ? 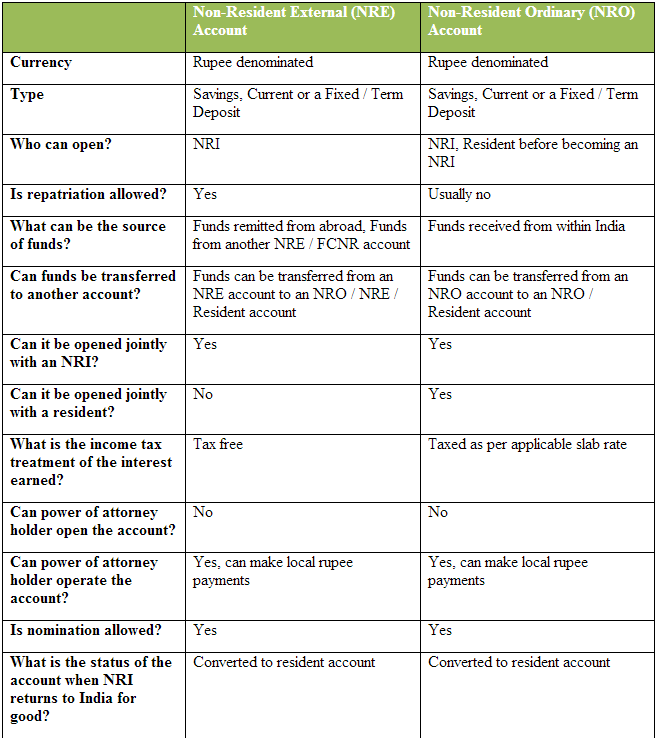 Funds remitted from overseas sources or local funds that would otherwise have been sent to the account holder abroad can instead be transferred to NRE Accounts. On the other hand, local funds that aren’t eligible to be remitted abroad must be credited to an NRO account.

Other bank accounts for NRIs

The deposit under FCNR (Banks) scheme is held in foreign currency. The interest and the repayment of the deposit is also made in the same foreign currency in which the account is maintained. The depositor may at his own will, obtain repayment in Indian rupees, converted at the buying rate on the date of repayment.

Non-Resident Account holders can grant power of attorney (for a specimen click here) or such other authority to residents in India for operating their FCNR(B) accounts in India. Interest rates are subject to the RBI guidelines.

Can I retain my savings in foreign currency even after return to India?
Yes you can. This is usually after a continuous stay abroad for more than a year. You can also keep your foreign currency in Resident Foreign Currency (RFC) account in any nationalized bank in India. These funds can again be transferred to your NRI account, if you go abroad or become an NRI again.

Can NRI bring Gold to India?
NRIs can bring into India gold up to 10,000 grams, once in six months provided they have stayed abroad for a continuous period of six months. They are required to pay custom duty in at the latest rate according to EXIM Policy in any convertible foreign currency. They can pay per 10 grams of gold brought. Currently the rate is Rs.220/- per 10 grams of gold.

I want to sell the gold/silver I take back. How should I do this?
Gold/silver brought by NRIs can be sold to residents for Indian rupees. According to the RBI rules, any person in India can buy gold/silver from the NRI by using a crossed cheque in India. Such money is credited to Ordinary Non-resident Rupee (NRO) account of the NRI gold/silver seller.

Can NRIs bring silver to India? Is there a maximum limit?
Yes. NRIs are allowed to bring upto 100 kgs of silver as part of personal luggage. This attracts import duty at the rate of Rs. 500 per kg. payable in foreign currency (U.S. dollars if going back from the U.S.)

Difference between NRE and NRO Accounts
Reviewed by Sanyam Jain on Nov 11 20124.5