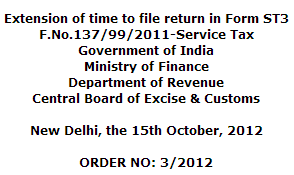 RULE 7 OF THE SERVICE TAX RULES, 1994 – RETURNS – EXTENSION OF TIME TO FILE RETURN IN FORM ST3

The circumstances of a special nature which have given rise to this extension of time are as follows:

(a) ACES will start releasing the return in Form ST3 in a quarterly format, shortly before the due date of 25th October, 2012.

(b) This will result in all the assessees attempting to file their returns in a short time period, which may result in problems in the computer network and delay and inconvenience to the assessees.