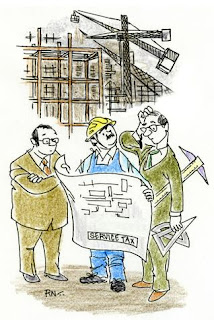 Taxation of EPC (engineering, procurement, commissioning) contracts has long been a matter of significant debate, ever since the Daelim case first laid the principle that a composite contract cannot be vivisected. Regulations and judicial guidance have since evolved, and fundamental questions are now pending before various courts including the Supreme Court. However, the dust has largely settled after the introduction of the “works contract service” in June 2007, although some controversy still lingers.

In principle, the new ‘negative list’ based taxation suggests that all services would be taxed unless specifically exempt. The term ‘service’ has been defined for the first time. A reasonable effort has been made to avoid controversy over the basic applicability of service tax, which is one of the key questions debated in the past. In the process, however, key changes have been introduced in the manner in which the tax is applied.

First of all, the big debate over classification of services into multiple categories under the old regulations has been addressed; now, all services are likely to be classified as works contract.

Secondly, the scope of what constitutes a works contract has been changed. In the revised definition, all contracts in which there is a joint supply of goods and services, whether for movable or immovable property, and whether relating to construction or repair/ maintenance are covered. Also, there’s a distinction between “original” works contracts — namely, new constructions — and others. (Read: Service Tax on Works Contract w.e.f. 1st July, 2012) The effective tax rate for original works contracts remains 4.94 per cent, while it’s 7.42 per cent for the rest.

Thirdly, the scope of exempt works contracts has been changed. Dams and canals now have no exemption unless it is provided to the Government — earlier, no tax was levied even if a private entity was the project owner. This implies that the cost of hydropower projects may increase. Combined with the limitations on deemed export benefits for non-mega power projects, under the recently announced Foreign Trade Policy, the indirect tax cost component of such projects would increase.

Similarly, for road projects, exemption has been limited to public roads. Earlier, even private roads (within a project premises, for example) were arguably eligible. However, in a welcome move, metro and monorail works contracts (only original) have been specifically exempted. In the past, there was disagreement over whether exemption to railways would cover metro and monorail projects. Also, specific benefit has been allowed for water supply, water treatment and sewerage treatment projects. This benefit has been limited to Government works; private entity contracts would continue to be taxed.

As certain benefits have been limited to Government works, it would be interesting to see how it is applied. Will a contract involving construction on a BOT/ BOOT (build-operate-transfer/ build-own-operate-transfer) basis through public-private partnership qualify for exemption? Will treatment differ between BOT and BOOT? Under a BOT contract, typically the property could vest directly with the Government and the project owner is only a concessionaire building, operating and monetising it. On the other hand, under BOOT the project owner may become the first owner of the facility and will later transfer the title at the end of the concession period.

Another relevant change is that where services are provided by one resident to another, it would be liable to tax irrespective of whether the immovable property serviced is outside India. On the flip side, services provided by a non-resident to another non-resident have been exempted even when provided in India. This could impact contracts between Indian entities for overseas projects, unless they are entered into by overseas entities/ offices.

The transition to the negative list scheme would be another challenge. For contracts on both sides of July 1, 2012, there could be issues ranging from taxability to classification, valuation, rate, point of tax, place of supply, and compliances. An analysis of the ‘tax clauses’ in contracts would be vital here. Also, a carefully planned transition strategy would be necessary to guard against tax and penalty exposures.

Thus, the issue of double taxation (at least partially due to valuation regulations) under VAT and service tax will remain a matter of concern for EPC contracts. It would be important to understand the niceties of the changes and the impact on bid price/ contract value to determine appropriate tax consequences. Contracts should relook service tax and evaluate the need for sizing risks to ensure bottomlines are unaffected.

Via: The Hindu Business Line