You are here: Home / Income Tax / TDS on Payment of Gas Transportation Charges 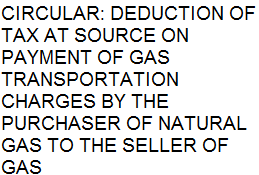 Representations have been received from various sections of the Industry on the difficulties faced in the matter of Tax Deduction at Source on Gas Transportation Charges paid by the purchasers of Natural gas to the sellers of gas.

2. The Hon’ble Gujarat High Court in the case of CIT (TDS) v. Krishak Bharati Cooperative Limited in Tax Appeal No. 618 of 2010 vide order dated 12-7-2011, has held that the question as to whether payment of Gas Transportation Charges by the purchasers of Natural gas to the Gas Distribution Companies is covered under the provision of Chapter XVII-B of Income-tax Act, 1961 (the Act) or not, can be ascertained only on the basis of the terms of agreement between the Gas Distributing Company and the purchaser of the Natural gas. In the operative part of the order, the Hon’ble Court says that in the facts of the abovementioned case, the agreement is for purchase and sale of gas. Transportation of gas is only a part of the entire sale transaction. Laying down the pipeline and supplying gas through such pipeline were the steps taken in furtherance of such a contract. There was a clear understanding of the parties that the ownership of gas would pass on to the buyer at the delivery point which clearly shows that transport of gas by the seller was a step towards execution of contract for sale of gas and there was no contract for carriage of goods. The Court added that Transportation of gas was only in furtherance of contract for sale of gas. The Hon’ble High Court then decided that in such a case the supply of gas is under a ‘contract for sale’ and not under a ‘works contract’ as envisaged under section 194C of the Act and hence in such a case TDS provisions are not applicable.

4. It is clarified that in case the Owner/Seller of the gas sells as well as transports the gas to the purchaser till the point of delivery, where the ownership of gas to the purchaser is simultaneously transferred, the manner of raising the sale bill (whether the transportation charges are embedded in the cost of gas or shown separately) does not alter the basic nature of such contract which remains essentially a ‘contract for sale’ and not a ‘works contract’ as envisaged in section 194C of the Act. Hence in such circumstances, provisions of Chapter XVII-B of the Act are not applicable on the component of Gas Transportation Charges paid by the purchaser to the Owner/Seller of the gas. The use of different modes of transportation of gas by Owner/Seller will not alter the position.

5. It is needless to mention that transportation charges paid to a third party transporter of gas, either by the Owner/Seller of the gas or purchaser of the gas or any other person, shall continue to be governed by the appropriate provisions of the Act and TDS shall be deductible on such payment to the third party at the applicable rates.